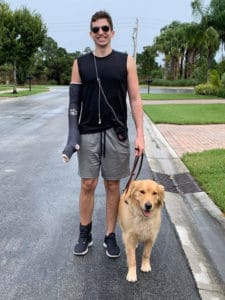 Chase graduated from Martin County High School in Stuart in 2012 and went on to receive a degree in International Affairs from Florida State in 2015. He moved to Orlando to attend graduate school full time at UCF and he also worked full time. He was living a typical busy, young person’s life complete with girlfriend and roommates.

One morning when his girlfriend was trying to reach him and not hearing back, she became concerned. She went to his apartment and found him unconscious in his room – his door had been closed and the roommates hadn’t noticed anything was wrong. After several frantic calls, we learned Chase was airlifted to Orlando Regional Medical Center where he was diagnosed with an arteriovenous malformation, or AVM, on the left side of his brain. It had burst and caused a massive stroke. It’s hard to believe this nightmare happened 3 years ago, but Chase beat the odds and survived, and we are so, so grateful. The path to recovery continues today.

Chase spent a month in the Neuro ICU at Orlando Regional Medical Center and experienced many complications: 3 bouts of pneumonia, blood clots in his lungs – and lost 55 pounds. When he finally regained consciousness he could not speak, read, write, sit up, walk, or take care of any of his basic needs. His right side was nearly completely paralyzed. He was transferred to the Rehab Unit at the hospital and spent an additional month there. It was there that we met our very first service dog, Mario, a beautiful Golden Retriever who comforted Chase and brought beautiful smiles before he had any words. John and I decided then that we would do anything we could to apply for a service dog for Chase because seeing Mario weekly had made such a profound impact on our boy.

While attending outpatient rehab after coming home to Stuart, Chase and I met Eagle and his partner at that time. She told us about Genesis and how to apply.

Since the day Chase and Lake met (during Chase’s Genesis interview), they seem to have had a special bond. Lake walks with Chase staying near and helping him feel more steady on his feet. He also retrieves items like a dropped phone, and acts as a brace to help Chase stand from a seated or kneel position on the floor. Lake can also open the refrigerator and other doors for Chase which is so helpful because his right arm and hand are not functional at this time. Chase has many muscle spasms on his right side, and Lake senses this and comes close providing extra comfort and love. Their relationship is very special and having Lake has made this very difficult journey of stroke recovery for Chase that much easier. We all feel very blessed to have him in our lives, and to be part of the Genesis Family.